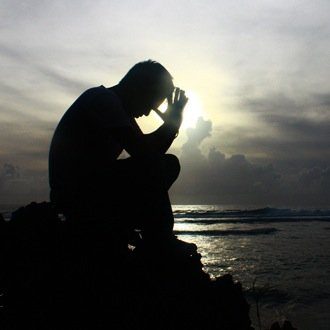 I was reading Psalm 91 this morning, and it just fills my heart with peace. God wants to make himself known to you, and give you peace when you put your trust in him.

Read through Psalm 91 slowly and prayerfully, and allow the peace of God to whisper to your heart about how good he is and how much he loves you.

Whoever dwells in the shelter of the Most High will rest in the shadow of the Almighty.

I will say of the Lord, “He is my refuge and my fortress, my God, in whom I trust.”

Surely he will save you from the fowler’s snare and from the deadly pestilence.

He will cover you with his feathers, and under his wings you will find refuge; his faithfulness will be your shield and rampart.

You will not fear the terror of night, nor the arrow that flies by day, nor the pestilence that stalks in the darkness, nor the plague that destroys at midday.

A thousand may fall at your side, ten thousand at your right hand, but it will not come near you. You will only observe with your eyes and see the punishment of the wicked.

If you say, “The Lord is my refuge,” and you make the Most High your dwelling, no harm will overtake you, no disaster will come near your tent.

For he will command his angels concerning you to guard you in all your ways; they will lift you up in their hands, so that you will not strike your foot against a stone.

“Because he loves me,” says the Lord, “I will rescue him; I will protect him, for he acknowledges my name. He will call on me, and I will answer him; I will be with him in trouble, I will deliver him and honor him. With long life I will satisfy him and show him my salvation.”

If you would like for us to pray for you, please reach out to us.

As I was reading through the Psalms, I came across an encouraging verse. The author writes: “I listen carefully to what God the Lord is saying, for he speaks peace to his people, his faithful ones” (Psalm 85:8a).

This is an amazing truth. If we listen carefully to what God is saying to us, we would hear words of peace. God, right this very moment, is speaking peace over you. All you have to do is listen.

But how do we listen? Obviously, we don’t “listen” with our natural ears–we listen with our spiritual ears. “God is Spirit, and those who worship Him must worship in spirit and truth” (John 4:24).

I think that’s why God commands us to “be still and know that he is God” (Psalm 46:10). When’s the last time you were just still; so still, that no intrusive thought could make its way into your mind? It’s hard to be still in this hectic, fast-paced world. But, it is so important.

“Well Russell,” you might respond, “I can’t control these thoughts in my mind.” Yes, I know that feeling all too well. The harder you try to push away those thoughts, the stronger they come crashing in.

Amazingly, when I surrender my mind and my thoughts to God, I am filled with peace. It’s as if I can “hear” God speaking peace over me. With my spirit, I listen carefully to what my Father is saying. His words of peace soothe my anxious soul.

Prayer: Father, you say in Romans 8:6 that a mind controlled by the spirit is life and peace. Lord, I surrender my mind to your Holy Spirit right now. Speak words of life and peace to my spiritual ears. I will listen carefully.

News of Jericho and Ai had spread throughout the land. The surrounding kings and people had also heard of the Lord’s miracles. They knew this was to be more than a physical battle.

The Hivites in Gibeon were among the local people who knew about these Hebrews. They were greatly afraid of Joshua for they knew that the children of Israel had come to take the land and destroy the inhabitants.

The Hivites knew they couldn’t defeat Joshua and his God, so they formulated another plan. They donned some worn-out sacks for clothes. They loaded their oldest donkeys with moldy bread and old wineskins, and went to meet with Joshua.

“We have come from a distant country. Please make a treaty with us,” pleaded the Hivites in disguise.

They had the appearance of foreigners from a distant land. Still, the men of Israel questioned them, “Perhaps you live near us. How then can we make a treaty with you?”

The delegation from Gibeon continued the masquerade. “This bread of ours was warm on the day we left. But see how dry and moldy it is now. And these wineskins that we filled were new, but see how cracked they are. And our clothes and sandals are worn out by the very long journey” (Joshua 9, paraphrased).

“The men of Israel sampled their provisions but did not inquire of the LORD” (Joshua 9:14).

They were duped. They fell for the moldy-bread-and-old-wineskin trick. They signed a treaty, thus disobeying God’s command to destroy the Hivites.

Fear is like that. The wolf comes to you in sheep’s clothing, bearing bogus gifts, creating a false impression. It has a way of making things seem one way when they are really another. It’s a powerful bluff.

The men of Israel really only made one mistake. Did you catch it? They “did not inquire of the Lord.”

God is ready for you to inquire of him. He wants to guide and lead you and expose the facade of fear.

Prayer: Father, enable me to recognize fear when it first approaches. Show me how to respond when I face fearful situations. Give me strength to stand, courage to continue, and grant me victory over fear.

The children of Israel had just defeated Jericho miraculously. Confidence was high. Morale was peaking. This new generation of warriors just experienced their first victory through God’s wall-crumbling power.

The next battle in their path was the small city of Ai. After their reconnaissance, the spies advised Joshua to send out only a few men. It was an easy victory… or so they thought.

However, when they attacked the city, the Israelites were chased into retreat and defeated. The soldiers came back to Joshua beaten and bloodied. They couldn’t overtake Ai. God was not with them.

Israel lost courage. Confusion and doubts began to rise up in their minds. Confidence hit an all time low.

What Joshua didn’t realize was that someone in the camp had disobeyed God. Against God’s command, Achan kept some of the spoil from the Jericho victory for himself and buried it under his tent. That disobedience kept the mighty men of Israel from defeating the small city of Ai.

After dealing with the sin, the Lord gave Joshua a new plan to defeat the small, but powerful city. With God’s help, the Israelites destroyed Ai.

When I read this story, it reminds me of my own journey into the Promised Land of peace. One day, I experienced a miraculous victory over panic attacks. I trusted the Lord and rested through the attack. My confidence ran high. I was walking proud.

Like Joshua, though, I headed out presumptuously into the next day. Panic again pounced on my mind. Dismay and doubts came crashing in. Where’s God? I thought. Why isn’t this working like it did yesterday?

Instead of trusting God and getting his guidance for my next battle, I went out in the confidence of my strength and my power. Like Achan, I had kept the spoils of the last victory to myself.

God should be our guide through each battle we face regarding panic and fear. If we remove all sin from our lives, seek his guidance and obey his instructions, we will be victorious. We will take the Promised Land of peace.

“Give us aid against the enemy, for the help of man is worthless. With God we will gain the victory, and he will trample down our enemies” (Psalm 60:11-12).

Prayer: Father, thank you for every victory I have experienced in the past because I know they came only through you. Reveal to me the times when I “went out on my own strength” and failed. Teach me how to seek your guidance and direction each morning as I face the battlefield for that day.

When the children of Israel were ready to enter the Promised Land, Joshua led them across the Jordan River to a city outside of Jericho.

Jericho–with its mammoth wall–stood before them. This would be their first battle. It looked like a lop-sided fight as a bunch of inexperienced Israelites headed into battle against a strong fortress of fighters.

As Joshua sought God on how to fight this battle, an angel with his sword drawn appeared before him. He gave Joshua specific instructions on how to fight. He explained that the people should walk around the city once a day for seven days. On the seventh day, they should walk around seven times. Afterwards, they should blow their trumpets and shout.

In faith, the Israelites walked quietly around the city just as Joshua commanded them to do. They couldn’t say a word while marching. Then, on the seventh day after the seventh trip around, the people shouted and sounded the trumpets.

“When the trumpets sounded, the people shouted, and at the sound of the trumpet, when the people gave a loud shout, the wall collapsed; so every man charged straight in, and they took the city” (Joshua 6:20).

Many times, I feel like the Israelites. No experience. No strength. No way I can fight against that fortress of fear. It’s just too tall, too big.

The next time that tall wall of fear stands before you, call out to God. Ask him to show you how to bring those walls down.

Whatever God tells you to do, do it. When you do, the walls will come tumbling down.

Prayer: Father, I am so weak and inexperienced. I cannot tear down this wall of fear on my own. Tell me what to do as I stand against my enemies. Give me the faith to wait on you and trust your promises.